Stellar Vortex was an interactive art installation for the Burning Man Regional event known as SOAK.  The installation was completed and available for participation at the festival between July 10th – 24th, 2014.

The project consisted of a large (14′) trampoline frame covered in white stretch fabric that sloped down to a 6″ hole in the middle. Balls are provided on the outside that can be rolled by participants on the surface of the fabric “cone”. As the balls roll they interact with each other and bend the surface of the fabric causing other interactions. The entire piece is lit with colorful lighting and black lights which make the balls glow and cause ‘tracer’ effects as they move. Once the balls fall into the middle hole they are returned to the outside of the piece to be used again. 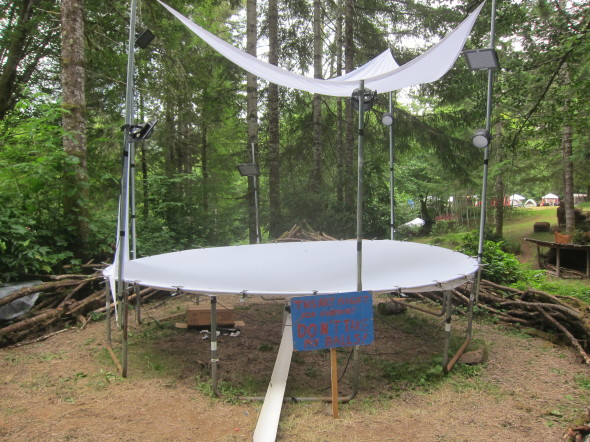 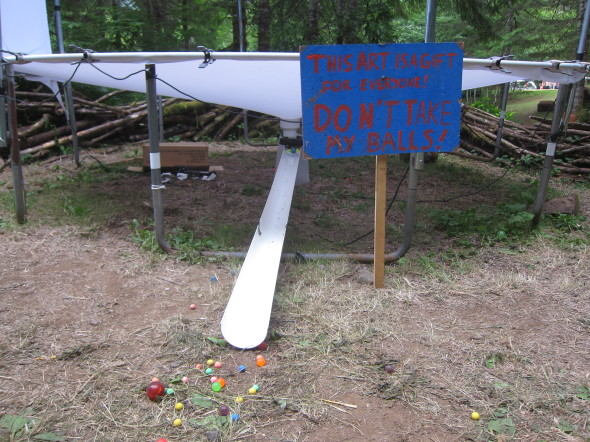 * – Previously this piece was jokingly entitled “Hippie Toilet”. The joke was based in the idea that large art pieces that glow and cause participants to become stuck for long periods of time at Burning Man are sometimes called “Hippie Traps”. Since this one had a sort of swirling motion it was jokingly referred to as the “Hippie Toilet” which persisted into the name for placement at SOAK 2014. As the piece is now traveling outside of the Burning Man Community, the piece has been renamed.